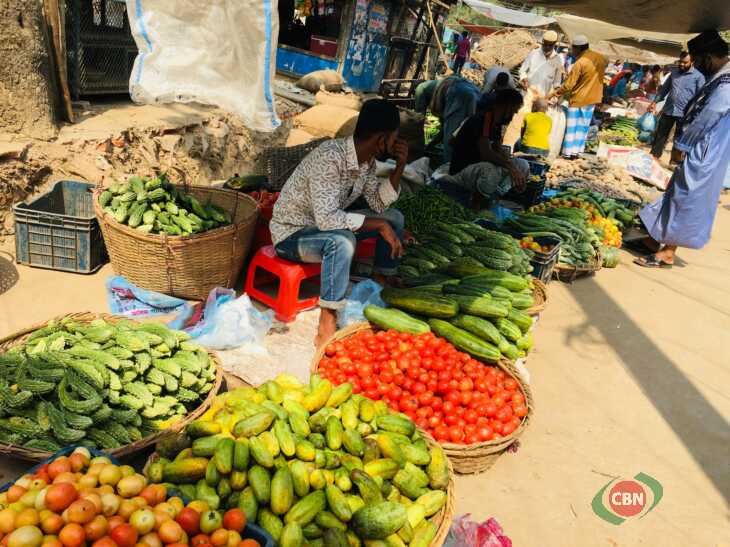 Md. Tauhedul Islam Rafi :
Fire in the vegetable market of Cox’s Bazar city. No vegetables are available under 60 taka. The buyers claim that the sellers are not decreasing the price by syndicate even though the vegetables are seen in the market. But the sellers say, how to buy vegetables at a low price from Aarat to sell them at a low price. The demand is increasing than the production, it has to be sold at an extra price. The poor and the middle class are suffering from this.

The demand of the conscious hall, the administration’s surveillance is must in the market. Otherwise, if the price is increasing like this, people will have to stay without eating.

On October 18 (Sunday), several markets including the city’s Kanai Bazar have been seen, the price of potatoes is higher than rice. Potatoes are selling at an extra price of 15 to 20 taka in KG over a week. Also the price of each vegetable is up. The price of potatoes, tomatoes and raw peppers has increased the highest. KG of raw pepper is being sold at 2 taka. Tomatoes are being sold at 110 taka per kg. And Lalita potatoes are being sold in kg from 55 to 60 taka, desi potatoes from 65 to 70 taka, barbati 70 to 80 taka, Titkarla 70 to 80 taka. Also, most of the vegetables including eggplant, barbati, kakrool, korla, mula, jhinga, chichinga are being sold for Rs 50 to 60 per kg. The price of onion is increased in a kg, the big market is sold at 90 taka, but the onion is being sold for 100 taka 110 taka.

Meanwhile, even after giving instructions by the administration, the raw markets and shops in Cox’s Bazar city are still not hanged, the list of the right prices of the products. Customers alleged that each product is being sold in the market recently. Meanwhile, the seller said, as the price of the products in the wholesale market has increased, the retail market has to be sold at a high price.

Also being sold at a little extra price as the demand is increased than the production. However, as the list of products is not being hanged, different products are being sold at each shop at a price. But the list of goods prices in some shops including the raw markets of the big market has been hanged, but there is a difference in selling with that price. Recently, the Shetan Mahal is claiming that it has become important to run the campaign on behalf of the administration. In some markets, the name of many products including raw markets are also empty, but the money is empty. People are being harassed by this.

It is reported that the administration has been directed to list everyone including market owners association, retail and wholesalers at the price of goods. There are also instructions on various issues including installation of digital weight measuring machine and cleanliness in every raw market and shop.

A rickshaw driver named Kalim Ullah said to buy vegetables in the PTSchool market of greater Rumaliya, I drive a rickshaw and run a family. From morning to 10 am, rickshaw would have been earning 5 ‘ hundred taka. From that time, if the rickshaw hike was gone, then the remaining would be 380 taka. If you go to the market with that, you don’t have money to buy fish. Recently, the price of vegetable in the market is hiking. Even though the price doesn’t increase more than before, you have to eat. For this reason, I am asking the administration to interfere in order to keep the price of the product stable.

Assistant Director of Cox’s Bazar District Office, Department of Consumer Rights Protection Md. Imran Hossain said, I have heard that every product is being sold at an extra price in the market. Adventures will be run in the market at any moment. Even though the list of excess prices and goods prices are not hanged, action will be taken against them. Consumer Rights Protection Department Cox’s Bazar Kazar’s campaign continues for public interest.