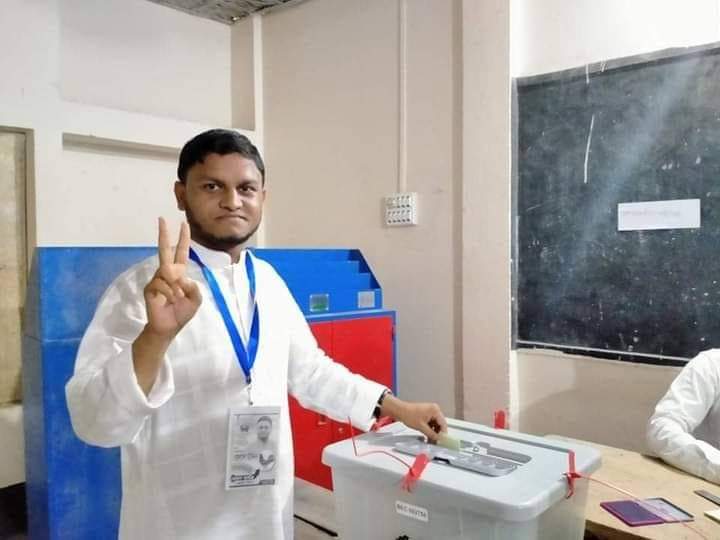 Md. Tauhedul Islam Rafi :
The sub-election of 9 no. ward of Rajapalong Union has been completed peacefully in Ukhiya of Cox’s Bazar. Voters have been seen to vote with huge enthusiasm at two centers on October 20 (Tuesday) from 9 a.m. to 5 p.m.

After counting the vote, Helal Uddin got 2098 votes with the rooster symbol and got elected private. The nearest competitive candidate Nurul Haque Khan got 908 votes for the Apple symbol.

The total number of voters in the Kutupalong Government Primary School Center is 2779 people have applied their voting rights out of 2231 Meanwhile, the candidate of the rooster symbol, Helal Uddin got 1208 votes. Apple symbol candidate Nurul Haque Khan got 645 votes. Football symbol candidate Abdul Haq got 324 votes. Jahangir Alam, the candidate for the lock symbol, got 54 votes. 36 wasted votes. Primary Education Officer Subrata Kumar Dhar performs the duty of Presiding Officer at this center.

In this context, the returning officer and the election officer of Ukhia Upazila, Muhammad Irfan Uddin said that the sub-election of ward no. 9 of Rajapalong Union has been completed freely, fair and neutral. As it is Rohingya-ruled area. Moreover, there are some Bengali inside the camp. So maximum security was strengthened by the administration.

He also said that the Assistant Commissioner (Bhumi) Ramu performed two teams of police and RAB at two centers as well as the Executive Magistrate. 17 Ansar and fire service units were present in each centre.

To know about this, Ukhia Police Station Officer Incharge Ahmed Sanjur Morshed said that the necessary number of police and law enforcement forces were deployed in the interest of completing peaceful elections. No unpleasant incident happened anywhere.

Context: On July 24, two people along with the most discussed Bakhtiar members of Ukhia were killed in the alleged gunfight with the police in Wabrang area of Teknaf, Ward U. Election Commission announced the post of P member vacant.

In an immediate response, the winner Helal Uddin said to the reporter, ′′ I am thankful to Allah that the election has been completed peaceful and fair without any unpleasant incident. Along with that I pray for the departed soul of my late father Bakhtiar Ahmed. Also expressing my gratitude to all the organisations including voters, election commission, upazila administration, police administration, BGB, RAB. He thanked the media workers for their sincere cooperation at this time.