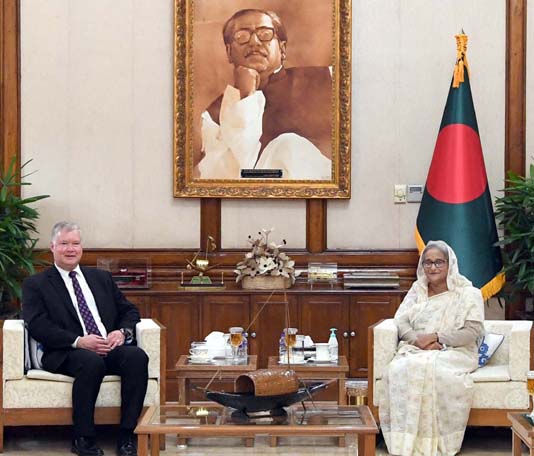 The Prime Minister said to Bigan, ′′ We want the return of Rohingyas immediately; the world community including the United States should help them with their return to Myanmar. ‘In response, Bigan said,’ We want permanent solution to the long-lasting Rohingya crisis. We will continue our support for Bangladesh on this issue. I’m going to be a

Prime Minister’s President Ihsanul Karim briefed the journalists after the meeting. He said, ′′ The Prime Minister said in the meeting, ′′ More than 11 million Rohingyas of Myanmar were forced to displaced in Bangladesh. This is too much burden for us. The problem is created by Myanmar and we are communicating with them, they should take back their citizens. ‘′′

The Rohingya issue is a social problem and a large number of displaced citizens of Myanmar are living in shelter camps in Cox’s Bazar, says Sheikh Hasina. ‘ Some mahals can mislead them to engage in anti-social activities, he said. So we want them to return home immediately. I’m going to be a

The Prime Minister and the US Deputy Secretary also discussed the secretly bringing back the murderer of Bangabandhu’s murderer Rashed Chowdhury. Began said, the US Attorney General Office is reviewing the issue. He also said that after the Covid-19 situation becomes normal, the visa service of Bangladeshi students will be resumed.

Stephen Edward Bigan, Deputy Secretary of the US Department of Foreign Affairs, said he has already discussed the issue of financial cooperation with Bangladesh officials. He said, ′′ The US government will work closely with Bangladesh to develop economic and trade relations. I’m going to be a

Bigan said, ‘ We are close to making the vaccine of coronavirus available and hope, this vaccine will be available in the market within the next two weeks. ‘ Several US companies are making vaccines and vaccinations will start at a huge rate from next year.

This top official in the US praised the unbelievable economic stability and progress of Bangladesh under the leadership of Prime Minister Sheikh Hasina. The United States wants to strengthen cooperation with Bangladesh in the fuel sector, noting that Bangladesh is attracting large amounts of foreign investments.

His government is setting up 100 special economic zones across the country to create employment as well as attracting more investments from abroad, the Prime Minister said. In addition to keeping the wheel of the country’s economy running during the epidemic, he briefly highlights his government’s steps to control Covid-19 At this time, the US ambassador Earl R Miller and the Chief Secretary of the Prime Minister Dr. Ahmad Kaykaus attended the meeting.

Earlier after a meeting with Foreign Minister Abdul Momen, the U.S. Department of Foreign Affairs, Stephen Edward Bigan, urged regional and global forces to take a strong role in solving the long-term of the Rohingya crisis in a joint press conference. He said, ′′ I want to put an emphasis on working shoulder to shoulder in all countries regional and globally on the issue of Rohingyas. This is not only the responsibility of the government of Bangladesh, it is a global priority. All countries in the Indo-Pacific region should be equally clear so that Myanmar is entrepreneur to solve the Rohingya crisis. I’m going to be a

In Cox’s Bazar, many countries and United Nations are giving humanitarian support to the Rohingyas. Even though a ‘long-term’ joint response program led by the United States and UK is in discussion on the Rohingya issue, Bangladesh wants to emphasize the Rohingyas to return to Rakhine.

Joint Response Program to be discussed on October 22

In response to a question from journalists, Bigan said, ′′ We don’t see this as a long-lasting solution to the Rohingya crisis. We agree with the Bangladesh government that Rohingyas need to find solutions based on their returning from the camp. In addition to meeting the immediate humanitarian needs of the Rohingyas, the international community has to double the initiative to reach a long-lasting solution to the crisis. I’m going to be a

′′ The United States has always been clear on the Rohingya crisis and has also used political influence to stop torture and return their rights to the Rohingya in Myanmar. I’m going to be a

In the meeting discussing the problems of the Rohingya community, Bigan said, ′′ In this case, it was discussed not only to meet their emergency needs, as well as how we can work together to get the burden off the shoulders of Bangladesh, to coordinate the issues that exist for permanent solutions. I’m going to be a

Foreign Minister Dr. Dr. said that the meeting has been discussed about returning the murderer of Bangabandhu Rashed Chowdhury Momen said, ‘ We discussed, this is what the attorney general of the United States sees. They said they were reviewing the issue. I’m going to be a

′′ We want to increase the diplomatic presence of Bangladesh for the welfare of the American people and Bangladeshi Americans, saying that the United States has been approved to consulate Bangladesh I’m going to be a

US top officer Bigan reached Dhaka last Wednesday afternoon on a three-day tour. That night, he met the Minister of State for Foreign Affairs Shahriar Alam at a hotel in Dhaka. There was reportedly the possibility of the Open Trade Agreement (FTA) as part of the post-epidemic.

Earlier yesterday morning Bigan visited Bangabandhu Memorial Museum at Dhanmondi no. 32 There he pays respect to the father of the nation. At this time, in the speech written by the International Visitors Book, he expressed his hope to move forward the cooperative relations of Bangladesh in the past.