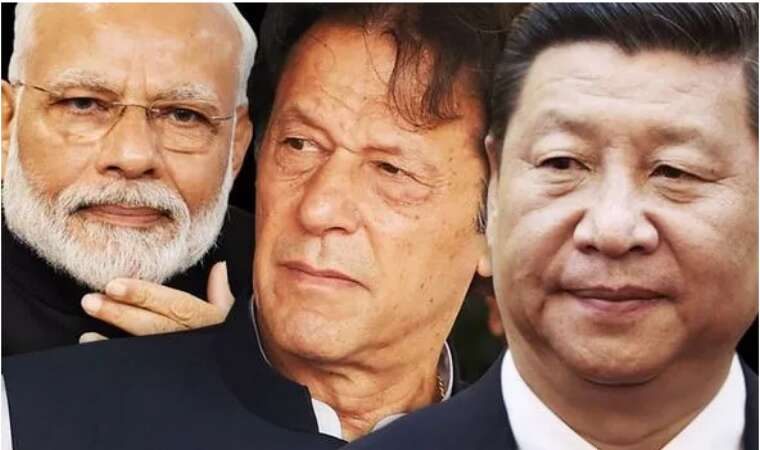 Former Soviet Union which had subjugated the minorities and ethnic groups in various provinces and regions through its military ultimately disintegrated in 1991. Even its nuclear weapons could not save its collapse. The major cause of the disintegration of the former Russian Empire was that its greater defence expenditure exceeded the maximum, resulting in economic crises inside the country.

In this backdrop, the present Indian rulers led by the Bharatiya Janata Party (BJP) has been following similar policies like abrogation of the special status of the Jammu and Kashmir by revoking articles 35A and 370 of the Constitution on August 5, 2019 to turn the Muslim majority into a minority in the Indian Occupied Kashmir (IOK), continued lockdown in the IOK, issuance of domicile certificates to 40000 non-Kashmiris to bring demographic changes in the Muslim-majority area, the martyrdom of thousands of the Kashmiris there etc. are notable.

Apart from Pakistan, China also rejected the Indian map and bifurcation of Jammu and Kashmir into two union territories as “unlawful and void”, and against the UNO resolutions. Despite the new agreement, the border dispute between New Delhi and Beijing, which still remains unsettled, has increased tension between the two countries.

Notably, Modi has also accelerated war-hysteria against Pakistan and instructed Indian forces to continue shelling across the Line of Control (LoC), which has killed many innocent civilians inside the Pakistani side of Kashmir.

And Indian extremist rulers have continued military clampdown in the Indian held Kashmir where Indian military and paramilitary troopers have broken all previous records of gross human rights abuses by martyring tens of thousands of the Kashmiris through brutal tactics, pallet-guns and various kinds of torture. But, Kashmiris are resorting to violate the curfew and clampdown by protesting against the suppression.

In fact, since Modi became the Indian Prime Minister, he started implementing the ideology of Hindutva ((Hindu Nationalism). Under his regime, persecution of religious minorities such as Dalits, Sikhs, Christians and particularly Muslims, including even of lower cast-Hindus has been intensified.

In this respect, the Indian Citizenship Amendment Act 2019 (CAA), passed by the Indian Parliament further exposed the discriminatory policies of the Modi government. The CAA coupled with the National Register of Citizens (NRC) is mainly targeted against Muslim immigrants especially from Pakistan, Bangladesh and Afghanistan.

Since last year, daily mass protests continued across every state in India against the CAA and the NRC. Despite criticism of the rights groups, foreign leaders, the UNO and moderate Hindus in wake of violent protests which killed and injured hundreds of persons—mostly Muslims by the police and prejudiced Hindus, Modi’s government has not withdrawn the CAA/NRC.

In this context, a government-appointed Delhi Minorities Commission said in its report on July 16, 2020: “At least 53 people, mostly Muslims, were killed and more than 200 were injured in the worst communal violence in the Indian capital Delhi…against a new citizenship law [CAA] in February, this year…laying out the path to citizenship for six religious groups from neighbouring countries except for Muslims. Critics said the law was discriminatory and flouted India’s secular constitution…Muslim homes, shops and vehicles…mosques were selectively targeted during the rioting…broke out across the country…Seemingly, to crush the protests, with support of the administration and police, a retaliatory plan of pro-CAA protesters was worked out to trigger violence at a large scale…Some senior BJP leaders like former member of Delhi legislative assembly Kapil Mishra of fuelling the Feb 23 violence”.

In its recently released annual report, the United States Commission on International Religious Freedom (USCIRF) recommended that the State Department should designate India as a Country of Particular Concern—pushed for imposing targeted sanctions on Indian government agencies and officials responsible for severe violations of religious freedom by freezing those individuals’ assets and/or barring their entry into the US under human rights-related financial and visa authorities.

In recent years, Maoist accelerated their struggle by attacking official installments. In this context, Indian media admitted that Maoists have entered the cities, expanding their activities against the Indian union. On 22-23 April 2018, at least 39 Maoists were killed in an alleged encounter with Indian security forces in district Gadchiroli. Maoist uprising is the second major freedom movement after that of the Occupied Kashmir. Indian former Prime Minister Manmohan Singh had called Maoist insurrection, “the single biggest internal-security challenge”, whereas, Home Secretary G.K Pillai had reiterated the magnitude of this threat by saying that the Maoists want to completely overthrow the Indian state by 2050. The Naxalite-Maoists, as they call themselves, are the liberators, representing landless farmers and the downtrodden masses who have been entangled into a vicious circle of poverty, misery and deprivation.

Nonetheless, India, dominated by politicians from the Hindi heartland—Hindutva has been using brutal force ruthlessly against Assam, Kashmir, Khalistan, Mizoram, Nagaland, Tamil Nadu, Arunachal Pradesh, Meghalaya, Manipur and Tripura. These states which are ethnically and linguistically different from the rest of the country are rocked by a large number of armed and violent rebellions, some seeking separate states, some fighting for autonomy and others demanding complete independence.

Instead of redressing the grievances of the people by eliminating injustices against them, the Modi-led regime is depending upon state terrorism to crush these extremist and secessionist movements. But, India’s unrealistic counterinsurgency strategy has badly failed.

It is notable that by ignoring the modern global trends like a renunciation of war, peaceful settlement of disputes and economic development, India has accelerated alarming arms race in South Asia.

In its report, the Stockholm International Peace Research Institute (SIPRI) has revealed on February 17, 2020 that in 2019, total global military expenditure rose to $1917 billion in 2019. It said that the five largest spenders in 2019 accounted for 62 percent of expenditure. India is among the world’s largest recipient of arms.

According to the ‘Military Balance 2018’ report of IISS, “India’s defence budget broke into the world’s top five…India overtook the UK as the fifth-largest defence spender in the world in 2017 at $52.5 billion, up from $51.1 billion in 2016.”

It is mentionable that India test-fired its longest-range surface-to-surface nuclear ballistic missile Agni-5 on December 26, 2017, which is capable of striking a target of more than 5,000 km away. It can carry a nuclear warhead of more than one tone. It can target almost all of Asia, including Pakistan, China and Europe. While, the Agni-6 is reported to be in the early stages of development and the most advanced version, with a strike-range of 8,000-10,000 km.

America is a potential military supplier to India. The US also pressurized IAEA and the Nuclear Suppliers Group to grant a waiver to India for obtaining civil nuclear trade on a larger scale.

While French aircraft maker Dassault Aviation has handed over four Rafale multirole fighter aircraft to the Indian Air Force in May 2020. Delivery of all 36 aircraft is expected to be completed by April 2022.

It is noteworthy that Indian ex-Army Chief, General Deepak Kapoor had said on December 29, 2010 that the Indian army “is now revising its five-year-old doctrine” and is preparing for a “possible two-front war with China and Pakistan.”

Particularly, the fast-growing economic power of China coupled with her rising strategic relationship with Russia, the Third World and especially Pakistan—after signing of the agreement China-Pakistan Economic Corridor has irked the eyes of Americans, Indians and Israelis. Owing to jealousy, America desires to make India a major power to counterbalance China in Asia.

Showing a realistic approach, Indian Minister of External Affairs Jaswant Singh who served the BJP for 30 years was expelled from the party for praising Mohammad Ali Jinnah [Founder of Pakistan] and echoing the pain of the Indian Muslims in his book, “Jinnah: India, Partition, Independence”.

Pointing out the BJP’s attitude towards the minorities, Singh wrote: “Every Muslim that lives in India is a loyal Indian…look into the eyes of Indian Muslims and see the pain.” He warned in his book, if such a policy continued, “India could have the third partition.”

Undoubtedly, Modi has accelerated the ‘Balkanization’ of India and Kashmir which has become a special target of India’s perennial state terrorism is giving impetus to other movements of separation and insurgency in the country in wake of financial crises, acute poverty and rapidly-spread of coronavirus pandemic.###