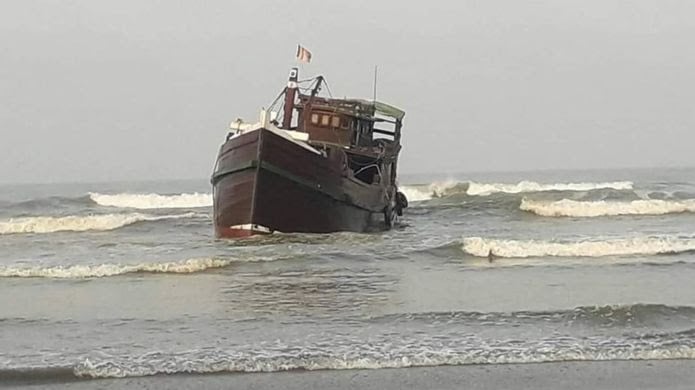 CBN DESK:
International community has continued to appease Myanmar by refraining from directly asking it to rescue several hundred Rohingya people who have been floating on at least two boats in territorial waters of the country, experts alleged.
‘We don’t notice any appeal from anybody to Myanmar to rescue its own people from its territorial water. Primarily, it is Myanmar’s responsibility to rescue those people who happen to be citizens of the country,’ Bangladesh Enterprise Institute president Humayun Kabir told New Age.
The boats in question are now out of Bangladesh’s maritime space, Bangladesh government officials said. ‘They are now in Myanmar water.’
The international community should pay attention to Myanmar instead of asking Bangladesh to allow foreign nationals to disembark from boats floating in their own territorial waters, Humayun Kabir, a former Bangladesh ambassador to the US, said.
Professor Imtiaz Ahmed believes that asking Bangladesh to receive these people from Myanmar territory ‘is part of a double standard’ and ‘tantamount to appeasing Myanmar.’
Myanmar government’s activities that creating such a situation in Rakhine that prompted Rohingya people to flee by boats ‘is a clear violation of provisional measures imposed by the International Court of Justice,’ said Imtiaz, who teaches international relations at Dhaka University.
The international community ‘is still mesmerised by Aung San Suu Kyi in spite of the genocide committed by the Myanmar military,’ he said adding that the US and the European and ASEAN countries ‘have been scrambling for business in Myanmar.’
Myanmar still enjoys GSP granted by the USA and the European Union, despite well documented evidence of genocidal acts and systematic disenfranchisement of the Rohingya people for decades, experts observed.
Japan topped the list of foreign investors accounting for more than 36 per cent of the overall investment in Myanmar in 2018-2019, and China, Singapore, South Korea, Hong Kong, the United Kingdom, Austria, Taiwan, France, Switzerland, and the Netherlands have also good investment in Myanmar, according to Mizzima, a newspaper published from Yangon.
Last week Bangladesh allowed a boat full of 396 Rohingyas to disembark when many of the maritime countries pushed them back.
Several international rights bodies including the UN Human Rights High Commissioner Michelle Bachelet Jeria and Human Rights Watch asked the Bangladesh government recently to immediately allow hundreds of Rohingya people stranded in two more trawlers to come ashore as they were not allowed to disembark in any of the countries in the Andaman Sea and the Bay of Bengal.
Professor Imtiaz said that the international community should mount pressure on Myanmar for a durable solution to the Rohingya crisis with safe and sustainable return of the people to their home under the rule-based international system, instead of encouraging further deepening of the crisis.
‘It is unfair and unjust to pressurise Bangladesh to welcome Myanmar nationals every time,’ he added.
Bangladesh has been hosting more than 1.1 million forcibly displaced Myanmar nationals in tourism district Cox’s Bazar for years.