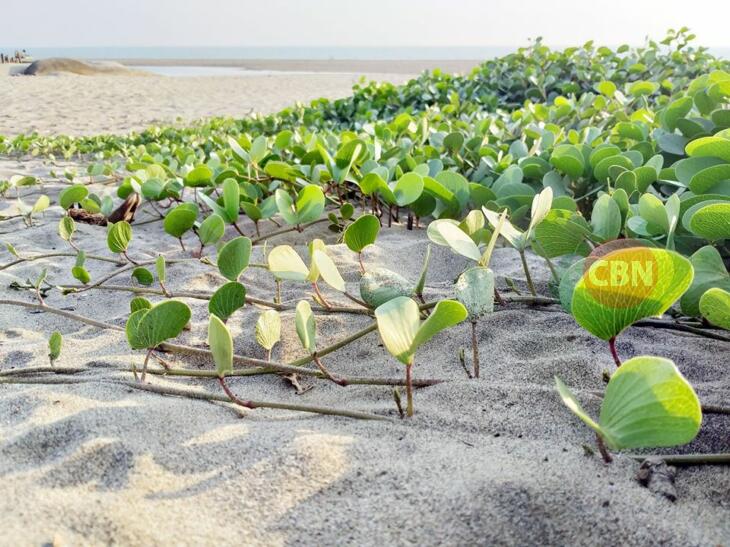 The touristic spots of Cox’s Bazar have been closed since March 18 .

No human foot is being printed on the sands till now.

At this moment , the ecological member of this sea beach, the Rail Road Vine is showing her existence by using this unique opportunity of the emptiness at the naked beach and it is also assisting in building the dunes.

The green nets plays an important role to make the dunes which are considered to be the safeguards to the sea.

The Rail Road Vine is the main architect of making the dunes by protecting the decay of the soil, and the dunes obstruct the bigger tidal bores of the sea, originated from the tornadoes, cyclones and earthquakes.

But the tourism industry, the human occupations and pollutions abandoned the dunes from Cox’s Bazar to Teknaf in last 3 decades.

As a result the bank of the sea collapsed and thousands acres of lands swallowed up by the sea.

Now in the time of the lockdown of Corona virus, the ruined nature is perishing back by itself using this ample opportunities.

Even a decade ago, there was a tremendous beautiful environment , full of pink, violet flowers from Cox’s Bazar to Teknaf.

Many tourist and the inhabitants of the city still regret for not having such a kind of environment any more.

The self recovery of the nature came to my attention when I was wondering around for last couple of days.

To recover the natural environment , the scientists planted and continued the grapevine forestation like the Rail Road Vine , in the beach of Florida of the USA and Husting Point of Australia , saw enormous success by creating the dunes.

Many country around the globe followed their footsteps that resulted succession in prevention of decaying of the soil and protecting environment by planting the Rail Road Vine.

It is proved that, the grapevine is also a developed plant to bring the environment back to its cuteness like the Rail Road Vine , the research says.

The Rail Road Vine can be grown on a mere nutritious sandy land. It needs a very little water too. It can endure the high salty water also.

Its root can go 3 feet inside the soil. It is a fast growing organism.

It can spread everywhere if it doesn’t face any obstacles and its nets cover the dunes from the tidal bores of the sea.

It makes the dunes and keeps it high with the help of the winds.

Thus the bondage between the dunes and Rail Road Vine takes place.

The name of this species is derived for its length, like the rail road, a Rail Road Vine can be as long as 100 feet.

A limited research on the Rail Road Vine was conducted by a senior scientist named Muhammad Ashraful Haque of Cox’s Bazar Fishery institution.

‘ we proposed to protect the environment of the sea by reserving the forestation and Rail Road Vine ,where the nature is regaining by herself ‘. said he.

To verify its truth, he invited the authorities and also summoned for the protection of the Rail Road Vine. as there are the facilities right now in the time of Corona .

The renowned environment scientist of Cox’s Bazar , Dr.Ansarul Karim said, ‘ there were hillocks by the size of 20 to 30 feet in to the bank of sea on the way to Cox’s Bazar and Tekhnaf , those all looked like the hills, were made of Rail Road Vine ‘.

‘ A magnificent beauty was prevailed for the presence of pink, violet flowers’, but for the absence of the dunes and Rail Road Vine , almost 500 meters of land had been lost’ he continued .

The mighty tidal bores cannot harm the locality of the beach area because of the dunes, which is said to be the safeguards of the sea beach.

During the cyclones, for the presence of dunes, the homes near the sea are always safe, waves can’t touch it and the winds are not that rapid.

The homes closed to the dunes were safe and protected during the cyclone of 1991.

Where there were not dunes, the homes were destroyed that time.

The professor of the department of forestry of the University of Chittagong , Professor Dr.Kamal Husain said that ‘ a number of dunes could be seen from Cox’s Bazar to Teknaf even 2 decades ago’, and many plants, delphiniums, creepers used to grow around these dunes and Rail Road Vines, and varieties of life existed ( biodiversity) but now for the unplanned development and pollutions , the dunes are lost and the Rail Road Vine is on its way to extinction .

The dunes are known as DEIL, in Cox’s Bazar region.

Many dunes were seen in the coastal areas of Kutubdia , Saint Martins of Cox’s Bazar and the people used to build their homes very closed to that of dunes.

This is why, the locality named after DEIL, such as Ali Akbar DEIL, Fodonar DEIL, DEIL para of Jaliaya Palong, Monder DEIL of Teknaf, DEIL para of Saint Martin.

There are many areas named after DEIL in Cox’s Bazar .

Once upon a time there was a DEIL, stretching 12 kilometers long, 500 feet wide from Nazira Tek to Kolatoli.

The height was almost 30 feet tall, the Rail Road Vine could be seen that time. It would give amazing enjoyment to the travelers.

But now many governmental and nongovernmental infrastructures have been built closed to these dunes, as a result , the Rail Road Vine cannot be seen anymore ..

But away from the city, on the dunes, the Rail Road Vine is still exposing its paragon beauty.

The environment scientists think that, for the safety and the existence of the crabs, birds, the Rail Road Vine is indispensable .

The railroad vine protects the rays of the sun from absorbing plenty of water from the soil. Thus a good atmosphere is created for the bacteria and other animals.

‘ if there are no Rail Road Vines and dunes in the beach, it literally means, there is the end of other animals’ , believes, renowned environment scientist , Professor Ragib Uddin of Independent University .

He also says, to increase the incredible beauty of the sea we need Rail Road Vine.

If there is no sea beach then the tourism industry will be lost, so keep the tourism alive and to save the biodiversity , the dunes and Rail Road Vines are needed badly.

In this regard, the professor Dr. Ashraf Ali, Department of environment, Forestry of Kazi Nazrul Islam University says, the sands are created from the particles of bedrock and from the broken parts of oyster and snails.

The sand coming from the hilly slopes build the bank of the sea.

And to preserve this bank, the Rail Road Vine is very important .