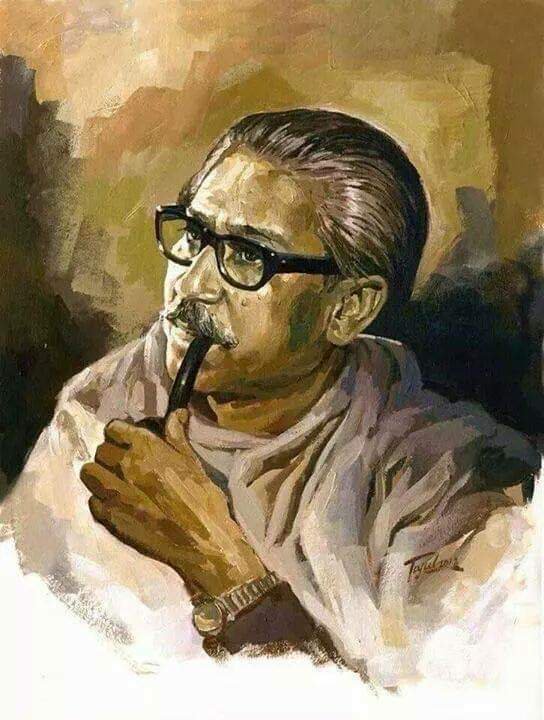 Such a long journey of brutal oppression, radical discrimination of Pakistani government to achieved independence, sovereignty via inevitable liberation war, Bangabandhu Sheikh Mujibur Rahman was the epic hero of the whole approach.

To flourish Bangladesh as free land and to germinate banglee nationalism, the dream he dreamt that then was also reflected into the eyes of 140 millions peoples who were been oppressed for decades .

The significance of the dynamitic power of his oration that had been delivered before millions of folks that engulfed the whole into mesmerized sensuality of courage, aspiration and combat dedication for a new, free and sovereign country.

The struggle that had begun in 1971, apparently we got the new independent country departed from Pakistan but the absolute freedom is still endangered because of Pakistani souls, agent and beloved are proactive all around the country.

To get back the happy smile on the lips of poor and distressed peoples of Bangladesh, Bangabandhu dedicated his entire life and his political adventure was based on the undefined patriotism and passion for the nation. His political philosophy and visions was centered only on the freedom and to eradicate the distress of Bengalee as well as to rebuild a country of nonviolence and communal harmony by emancipating the existing socio-economical status then.

Since the dream of Bangabandhu was unified with dream of 140 millions peoples of Bangladesh subsequently both merged each other into a single unit. The charismatic and mesmerizing leadership of Bangabandhu, his brave heart ,foresight, dedicated perceptions, fortified directions, proper evaluation, profound trust, love and commitment for the country that accelerate the dynamism of the spirit of independence which had given the break through to achieve the independence and freed the motherland earlier .

Fidel Castro, The great Revolutionary leader of socialist Cuban apprised Bangabandhu as a great as the Himalaya. He quoted that I have not seen the Himalayas. But I have seen Sheikh Mujibur Rahaman. In personality and in courage, this man is the Himalayas. I have thus had the experience of witnessing the Himalayas. (Non-Aligned Summit held in Algiers in 1973)

In 15 August 1975, having the historical tragedy of massacre of Bangabandhu, the dream that had dreamt up 140 million folks of Bangladesh that merged the dream of Bangabandhu had been disbanded.

Bangladesh had been derailed from its silk line of dynamic progress that was made under the leadership of Bangabandhu after the liberation war. Bangladesh and Banglee nation had fallen on the brink of burning pan, eventually the rein of power was handed by anti liberation thugs and they have proactively rooted their roots into the deep of the country.

All that the plots to fulfill the dream of being a happy harmonized and enriched Bangladesh that had been made by Bangabandhu, the tragedy of 15 August have quaked the all order of chains . Even if the spirits, aims, objectives and ideological values of independence also have illegally summoned as being forbidden.

Anti-liberation force accompanied by their rackets that were proactive since the libration war has tried to mobilized the country on the way of pro-Pakistani ideology. The organized circle of anti-liberation thugs of Razakar, Al-Badr, Al –Shams have been politicized as being Jamayet- e- Islami had left no endeavors unturned to erase the history liberation war , the leading role of Bangabandhu and the role of Awami league as a leading organization of independence.

We sincerely mourn the tragic massacre of Bangabandhu family and share the pangs of suffering along with the Honorable Prime Minister, Sheikh Hasina and the members of her family who are alive.

We urge upon her to take initiative with international support to unfold the mystery of Bangabandhu treacherous and cruelest heinous murder. It is high time to form a commission to find out and to punish the real beneficiary of Bangabandhu’s assassination and post 75 military led government.

To an Interview with Sir David Frost on the BBC in 1972, Bangabandhu Sheikh Mujibur Rahman quoted my greatest strength is the love for my people; my greatest weakness is that I love them too much, the too much love for the peoples of Bangladesh had taken the opportunity of treachery to demolish the unfinished history but the history has resurrect itself again from bottom line.

To implement the political views and ideologies in accord with the aims and objectives of the liberation war, I like to request to the running Awami league led government to take the following initiatives:

To establish mandatory school / institute of Bangabandhu and Bangladesh at every private and public university of the country to research, study and to confer Bachelor, Masters, M Phil, Doctorate and Post Doctoral degree.
To open undergraduate and post graduate course on ‘Bangabandhu and Bangladesh’ in every colleges, public and private universities.
To inaugurate compulsory subject (100 marks) in every level of educational institute.
The salutary slogan of liberation war “Joy Bangla” should unanimously compel to be uttered in every nation sector whereas it is needed.
To appoint a specialist teacher on Bangabandhu and liberation war, a cultural teacher, psychological counselor, drawing teacher, debating teacher and a music teacher in every educational institute from primary level to higher secondary.
To form a judiciary commission to find the facts of Bangabandhu assassination and the posterior direct or indirect beneficiary, mastermind of the indemnity ordinance.
To protect and conserve the tomb of all certified freedom fighters and to set up epitaph and tombstone so that it may influence the all citizens of the country by the dignity, glory and honor.
To change the name of all public or private education institutes , roads and hi-way, bridge ,culvert , station, premise , playground , market places, public or private library , Auditorium which are followed by the name of Razakar , Al Badr or any other miscreants or anti –liberation thugs or pro-Pakistani soul.
To cancel or ban or nullify any allotment, movable or immovable properties, any sanctions, or grants which have been taken by Razakar, Al Badr or any other miscreants or anti –liberation thugs or proactive Pakistani soul or who are actively (directly or indirectly) anti Bangladeshi or subversive to the objectives of liberation war or country’s gradual developments or to the governments.

The spirits of Bangabandhu, his philosophy, his visions, his eternal love for the peoples of Bangladesh is still alive and will be remain for ever.