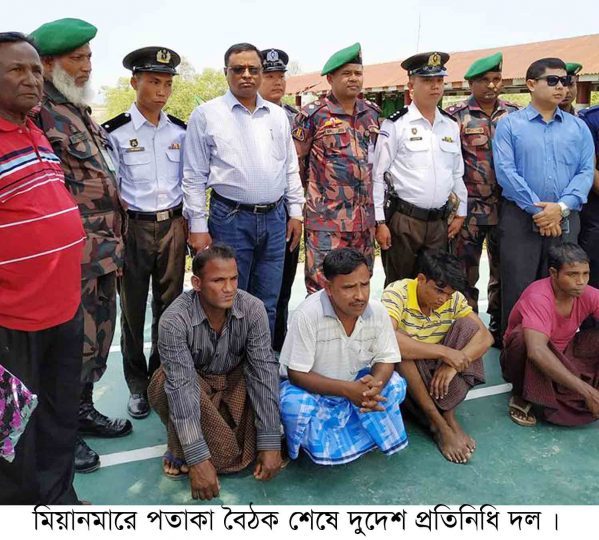 Four Bangladeshis were arrested in Myanmar on the way to Malaysia and YABA smuggling. Eventually, they have been released after nine and half years of imprisonment. The Border Guard Bangladesh (BGB) brought them back to Bangladesh on Wednesday (March 20th) through dialogue between two countries.

According to BGB source, after a series of discussion Myanmar agreed to release four prisoners. As a result, A meeting was held between two side at 11 am in Mandhu Entry-Exit Point on Wednesday, 11-member delegation from Bangladesh led by Major Shoriful Islam Acting Commander of Teknaf 2 BGB battalion and deputy director of Mandu District Police Thin Lyn were joined the meeting. Finally, four Bangladeshi were handed over to the BGB.

Teknaf 2 BGB Battalion’s acting commander Major Shariful Islam Jomaddar said,Two people of Nazir Para were sentenced to 21 years in Myanmar court for Unauthorized entrance on the way to Malaysia and Two more from Moulovi Para were convicted for 25 years in connection with YABA Trading. After 9 years detention Myanmar government forgave and release them. They have been sent to Teknaf Police station in order to hand over them to their family.